OPEN RAMP at USCG Air Station Traverse City   Friday 1 July  This annual event is held as the open house at the Coast Guard Air Station.    All Airshow performer aircraft will be on display including the Blue Angels F/A-18 Super Hornets.  This event is always held the night before the weekend Airshow.   There is no flying. Rater, this is all static displays.   IMPORTANT:   Post 9/11 security on the airport is still an issue.     Approximately 10,000 people have been known to attend this event which starts at 5:30, but here’s the deal;  if you can come in and help set up, you get to arrive early and park on board the Air Station.    Please be here at 4:30.    4:45 at the latest, otherwise you get to join the crowd.   We’ll also need help taking things down so please plan on staying until about 8 p,m.   MORE IMPORTANT:   To gain this early access,  I must have names in advance.   No names?  No early entrance and showing a military ID won’t do it.  Let me know by 28 June.  Just email the names of all persons in your vehicle and I’ll forward to Security.    Please don’t come with a car full of little kids and ask for early access to help set up.    That would be pushing it!!!

Look forward to seeing everyone!

The Michigan Chapter of the Vietnam Helicopter Pilots Association will tour the Whirlpool Corporation Travel and Aviation Center on Wednesday, June 15.  VHPA pilots will meet at 10:30 AM at the Center and hangers located at 607 Woodland Ave., Benton Harbor.  Following the tour, they will have lunch at the Buck Restaurant located at 412 State Street in St. Joseph.  All pilots and guests should contact Glenn Youngstedt at Glennyoungstedt@aol.com to make reservations by no later than June 14.  Transportation can be arranged for those who fly to the Benton Harbor airport.

For more information on the Gilmore Car Museum event GoTo :

Bob Rich and Glenn Youngstedt are heading up a visit to the Gilmore Car Museum on Tuesday, May 3, beginning at 10:00 AM.  The Gilmore is located at 6865 Hickory Rd., Hickory Corners, MI 49060.  All Michigan Chapter members, associate, family and friends are invited.  The attendees will have lunch at the museum and share tall and short tales of their experiences in Vietnam.  Those interested in attending should contact Bob Rich or Glenn Youngstedt (touch to email & make a reservations) by May 1, 2022.  The cost is $16 per person. More information on the Gilmore Car Museum can be found at www.gilmorecarmuseum.org.  This is an incredible museum and well worth the visit.

Touch for directions to the event.

The Michigan Chapter VHPA is planning a visit to the Gilmore Car Museum on Tuesday, May 3, 2022, beginning at 10:00 AM.  The Gilmore is located at 6865 Hickory Rd., Hickory Corners, MI 49060, 16 miles northeast of Kalamazoo. All Michigan Chapter members, associate, family and friends are invited.  The attendees will have lunch at the museum and share tall and short tales of their experiences in Vietnam.  Those interested in attending should contact email: Bob Rich or email: Glenn Youngstedt; text/phone: to make reservations by May 1, 2022.  The cost is $16 per person. More information on the Gilmore Car Museum can be found at: www.gilmorecarmuseum.org.  This is an incredible museum and well worth the visit. More information go to the Events Page 2022 on this Site.

Touch for directions to the event.

The Michigan Chapter of the Vietnam Helicopter Pilots Association will be touring the National Museum in Dayton, Ohio on Wednesday and Thursday, October 27 & 28, 2021.  Members and guests will travel to Dayton the morning of the 27th.  Members will meet inside the museum entrance at 1 PM.  They will tour the afternoon of the 27th and morning of the 28th and return home that afternoon. Members will stay at the Comfort Suites, 5220 Huberville Ave, Dayton.  Members can make their hotel reservations by calling 937-425-6498. Members should mention they are part of the Vietnam Helicopter Pilots Association to get a group rate.  The deadline for the group rate is Oct 24. The hotel is located near the museum.  Members and guests will dine at a local restaurant to be determined.  For more information contact Glenn Youngstedt: at 269-861-0596.  Members should contact Glenn by Monday, October 25, 2021 if they plan on attending.

Located north east of Dayton, Ohio, the National Museum USAF is great and wide-ranging – in both time and space. The museum represents everything related to flight – from first flights to space.

The entrance to the National Museum of the United States Air Force is on Springfield Street at historic Wright Field (Gate 28B), Wright-Patterson Air Force Base, six miles northeast of Dayton, Ohio. 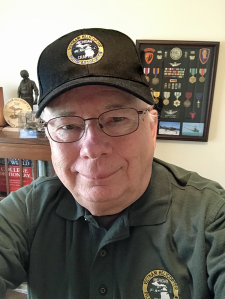 Just because we were unable to hold the annual spring meeting last Saturday, it doesn’t mean we can’t have a group photo.  Bob Rich proposed we do a virtual group photo using your selfies.

So if you were planning to attend the spring meeting, or if you have attended a spring meeting in the past, or if you just want to get in on this, please send your selfie to me.  It should be a natural, quarantined version wearing whatever you would have worn at the meeting – or not.   See the photo below as one idea.  Note the extra hair over my left ear – there’s a lot more behind that.

The photos will be compiled into a gallery.  I’ll send it out to everyone, of course, Bob Rich plans to publish it on our Michigan chapter website and/or Facebook page, and I’ll submit it to the VHPA Aviator as well.  You’ll be famous.

The deadline for submissions will be in two weeks – May 20th.

The scheduled chapter events for 2019 are listed below, this list was taken from chapter President Rich Deer’s recent emails and will be updated on the chapter calendar tab above:

Below is a tentative list of possible activities for our chapter to participate in this year. The first few are either accomplished or already planned. Several of the others have been annual events for us if there is still interest in them again this year.

This list is not carved in stone. If there are other activities of interest please let me know so they can be added for consideration. Each one requires someone to take the lead on making necessary contacts and coordinating volunteers to participate. Assistance/support will be solicited on request.

A standing suggestion/recommendation/request is for individual members to consider hosting a gathering such as a lunch, golf, you-name-it in their area to simply get some of the guys together to develop new and better war stories. It doesn’t have to be any big event, just find a place, let me know the date and time and I’ll put it out to everyone.

This will be on the agenda for discussion at our May 4th spring meeting at noon at the Log Jam Restaurant in Grand Ledge.

No events are scheduled for “The Traveling Wall” or “The Wall That Heals” in Michigan for 2019.

To All Michigan Chapter Vietnam Helicopter Pilots Association Members and Interested Parties,
The spring meeting was held May 5, 2018, in the Back Room of the Log Jam Restaurant in Grand Ledge with 20 members, spouses, and guest in attendance.

Yesterday I had the chance to spend some time in Traverse City with fellow combat helicopter pilots from the Vietnam War. I truly enjoyed the camaraderie, time together, and stories told with members of the Michigan Chapter of the VHPA.

The dedication ceremony for Vietnam Helicopter Pilots and Crewmembers held on April 18, 2018, at 4:00 pm in Arlington National Cemetery was well attended by VHPA members, Crewmembers, and supporters. The new monument honors the nearly 5,000  aviators and crewmembers who died during the Vietnam War. 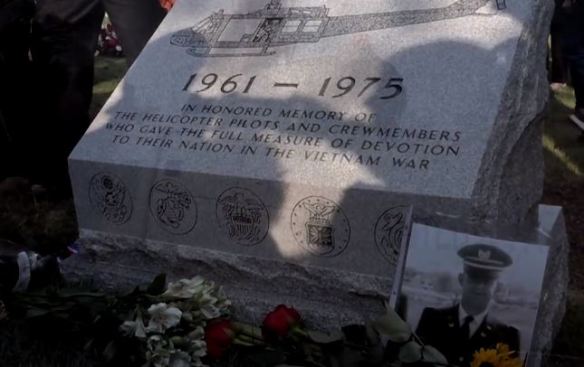 A  ceremony for those that lost there lives operating helicopters in the Vietnam War was held in Arlington Cemetery’s outdoor auditorium near Section 35 and close to the iconic Tomb of the Unknown Soldier. Speakers included Bob Hesselbein of the Legacy Committee VHPA, Julie Kink of Gold Star Families her older brother was killed while serving as a helicopter pilot in Vietnam, Mjr Gen Carl McNair Army Aviator in Vietnam and Congressmen who helped make the monument bill become law.

Speaking with Bob Hesselbein the chairman of the Legacy project about the monument he thanked the Michigan Chapter VHPA for their financial help.

Flyby of USAF Huey’s accompanied the ceremony after the retiring of the colors. View a full video of the flyby at https://photos.app.goo.gl/79Q3uzlzvhShURLh2 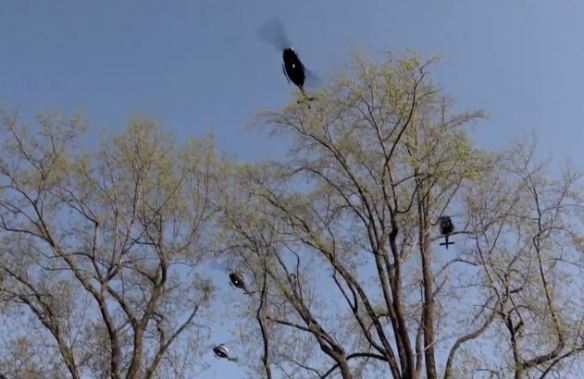 The reception held at WMSAM center located near the cemetery entrance concluded the Pilot and Crewmember monument dedication ceremony and a four-year effort by the Legacy committee.